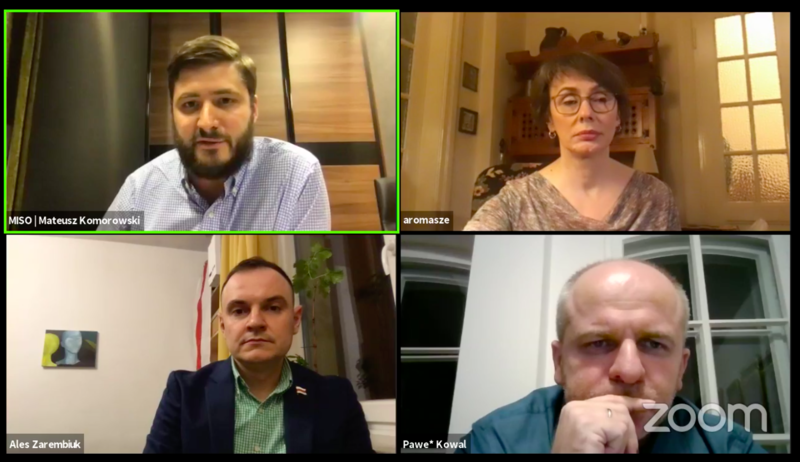 On November 25, 2020, the tenth debate took place within the Debate Club on Civil Society. It was entitled “Belarussian Civil Society Against the Lukaszenko Regime” and was organized by the International Institute of Civil Society (IICS) and the Konrad Adenauer Foundation in Poland.

Taking part in the meeting as speakers were: Professor Paweł Kowal (Member of the Polish Parliament), Editor Agnieszka Romaszewska-Guzy (Director of TV Biełsat) and Aleś Zarembiuk (President of the Belarussian House Foundation). The debate moderator was Mateusz Komorowski (Founder and President of IICS).

In Belarus in 1994, then 39 year old Lukaszenko ran in the presidential elections with the slogan: “I’m neither with the left, nor with the right - I’m with the nation.” The candidate gained more than 80% of the vote and became president. To this day he will not give up power. Where did Lukaszenko come from, and what made the former director of a state owned farm become president and stay in power for so long?

Paweł Kowal, trying to answer the question posed, began with an outline of the situation in Belarus. - “In the post-Soviet space, with the exception of the three Baltic states which were a part of the empire for a relatively short period of time, there is in fact no possibility for the effective operation of standard democratic mechanisms. Lukaszenko lasted so long because society, up until now, wasn’t strong enough to change him by way of revolution. Neither democratic procedures nor institutions worked. Secondly, as it turned out, the layer of leadership in Belarus was relatively shallow at the time of the fall of the USSR and wasn’t able to maintain power in the state. Lukaszenko quickly intercepted it using all of the classical instruments — appealing to resentments and the imperial-Soviet tradition, for example.” — he said. He noted that, only today, a universal Belarussian nation forging itself in the protests is being born.

Additionally, there is a widespread belief that in Belarus there exists no layer of oligarchs that influence power so strongly, as is the case in Russia or Ukraine. Editor Agnieszka Romaszewska-Guzy of TV Biełsat explained that this is the wrong line of thinking. — “An influential layer is connected with the so called Lukaszenko family, spoken of as Lukaszenko’s wallet”. — she said. However, Lukaszenko’s populist rhetoric was able to cover up those practices.

A leader that is able to maintain power so long owes it to a mix of his talents, the situation, and luck. In Editor Romaszewska’s opinion this was the case for Lukaszenko. The situation in the country favored his takeover of power. Everything that we observed happened in other post-Soviet countries. After the first “choking off” of freedom, social disappointment and fatigue with the situation follow. Lukaszenko found the answer to the nightmarish end of the USSR and the terrible poor in Belarus.

An important subject of our discussion was the democratic condition of the opposition in Belarus, which is being accused of weakness that is enabling Lukaszenko to maintain power. Aleś Zarembiuk didn’t agree with this thesis. In his opinion, the dictator has been destroying democracy over many years — he started with the parliament then the media and non-governmental organizations. And then he began to kick active and independent people out of the country. - “By 1995, the beating of deputies in the parliament building had already taken place. One year later parliament was dissolved, and the flag and state symbol were changed. A systematic dismantling of the entire democratic system had commenced. The former Interior Minister, Jurij Zacharenka, and the head of the Central Election Commission and former Vice-Premier, Wiktor Hanczar, both died. The Vice-Marshall of the Belarussian Parliament, Hienadź Karpienka, died in unexplained circumstances. After 2001 when Lukaszenko won for the second time he started to close all non-government organizations.” — the Belarussian House Foundation President said.

Today, after 26 years of the regime there is almost no independent media left inside the country. Most active non-governmental organizations aren’t registered because they fear persecution.

Undoubtedly, the omnipresent censorship and propaganda of state media has been an aid to Lukaszenko. - “People needed time to understand that that which is shown is not reality. Today, when they see under their own window what the authorities are doing and what they’re capable of they understand more. Just a few years ago TV Biełsat was supposed to be closed down and people didn’t feel the need for its operations. Today the opposite is true.” - Zarembiuk said.

From a historian’s point of view, Paweł Kowal noted that today we are seeing through the lens of Belarus processes which started in most Central European countries in the nineteenth century. — “A universal, national awareness is being born. People feel on a massive scale that they aren’t Russians - that they have their own, separate history. This rejection of the flag imposed on them by Lukaszenko and their getting used to the national colors is precisely a symbol of Belarussian national awareness.” — he said.

All of the presenters agreed that Lukaszenko’s time has come to an end. Though it seems that the world has forgotten about Belarus at the moment (mainly taking care of the raging coronavirus and approaching economic crisis), the change in US President is good news. — “Joe Biden has experience in this part of Europe - and his Secretary of State does also. We can assume that the issue of Belarus will awaken the interest of the new US Administration.” - Kowal said.

In the Kremlin they also know that Lukaszenko no longer has anything to offer as a leader. For Putin this is a huge problem. — “Lukaszenko doesn’t have any legitimacy anymore — neither electoral nor post-electoral on the basis of ‘the people love me.’ The people evidently don’t love him anymore. It seems that the solution to this complicated geopolitical situation lies in the hands of the Belarusians themselves — in their determination, persistence and maturity. They have passed the exam with flying colors so far. Protests have already been going on with great mobilization for 100 days and this is a huge achievement. The world won’t be able to ignore that.” - Editor Romaszewska said. In turn, Paweł Kowal added that Belarussianss determination exceeds all norms and that he can't recall such a long protest at such a high level of mobilization.

According to Alesia Zarembiuka a long march awaits Belarusians. - “We see what the situation looks like. There were moments where more than 200,000 people came out for Sunday marches and today there are less of them. For while the authorities didn’t know what to do in August (acting erratically), today they are united. Many - including journalists and young people who were doing live streams — are already in prison. Beatings, murders and waves of repression across the country all point to the fact that this will be a very partisan fight.” — he said.

The situation could also change the economic crisis. Perhaps it will end the Lukaszenko regime. — “If not, then we won’t give up and this will be a long fight for Belarussian civil society. Finally, an uprising of the Belarussian nation has taken place 102 years since the announcement of the Belarussian People’s Republic. Now all of Belarus is white, red and white, and that won’t change anymore. Belarus will be independent and will oppose any attempted absorption from Russia. We will be victorious in this march. The question is only when and at what cost.” - Zarembiuk said.

Editor Romaszewska added that — undoubtedly — the completion of the “formation” of a civil society in Belarus is taking place. People are proud of how they’ve been able to mobilize and react to the rigged elections. — “Belarus was a society which was madly atomized for 70 years by Soviet governments. It was a peasant society because the intelligencia was to a large extent murdered. That entire history was very difficult. Society survived but everyone fended for themselves. In a group it is easy to undertake a decision — one feels supported. Here, we were dealing with a situation where each person separately, individually and consciously made a decision to participate in the protest. That is more difficult, and it is why the protests today have a particular weight and show the strength — as well as the determination — of the Belarusians. They finally felt a bond and the need to be together.” — the TV Biełsat Director said.

During the debate we also brought up problems regarding EU financing of Belarussian civil society, as it turns out that for years EU funds reached organizations assumed by the regime — so called governmental organization. — “This was a system to extort EU money and support people and centers of the regime.” - Zarembiuk said. — “Paradoxically, at the same time our revolution was successful thanks to this. Over the course of 5 years real civil society went through a difficult time. Apart from Poland and maybe two or three other countries which financed real, independent non-governmental organizations, that money didn’t exist. This is why crowdfunding has developed — society itself began to finance its own projects and organize debates or concerts.” — he said.

For years the people solved local problems by themselves — forming their own neighborhood networks. Today they are creating a movement numbering hundreds of thousands of new activists. Now they are receiving financial support from the EU. - “There is a particular need for funds to educate and strengthen the national identity. I speak with young people who think the white, red and white of the flag are just the colors of protests. People feel their own nationality but they don’t know their own history.” - Aleś Zarembiuk added.

The Belarussian House Foundation President also noted that changing the President’s name isn’t enough. The system must change. Reforms must be carried out. — “Belarusians who go to Poland for work can compare the effectiveness of democracy with the effectiveness of dictatorship when it comes to earnings. The Polish experience will be very important. Any help from countries that were already in a similiar situation 30 years ago and today can share their knowledge” — he added at the end.