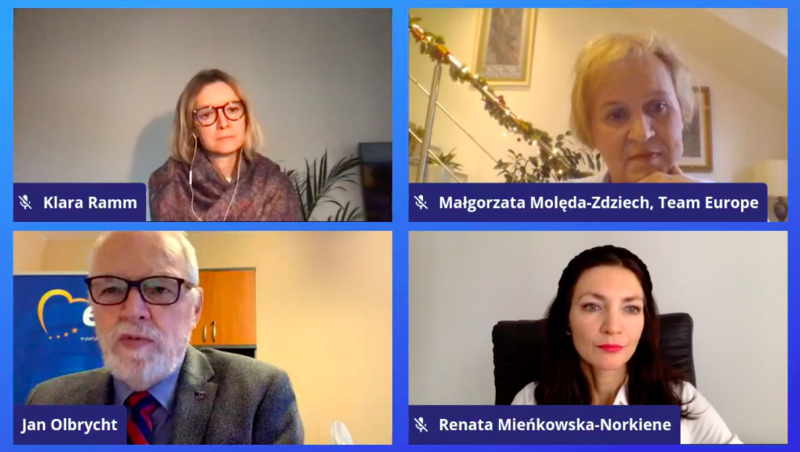 On December 8, 2020, a debate entitled “Consequences of the EU Budget Veto for Non-Governmental Organizations and Civil Society” took place, and was organized by the International Institute of Civil Society (IICS), IICS Analysis Center, as well as Team Europe.

The debate’s special guest was Dr. Jan Olbrycht (a Member of the European Parliament). Professors Renata Mieńkowska-Norkiene (of IICS) and Małgorzata Molęda-Zdziech (of Team Europe) also took part in the meeting as presenters. The debate’s moderator was Dr. Klara Ramm (of the IICS Analysis Center).

Professor Małgorzata Molęda-Zdziech observed that only the financial aspect is being brought to light in the public debate on the upcoming European Union budget. Little is said about it in the context of civil society and non-governmental organizations. The meeting intends to simply look at the consequences of the veto from the point of view of civic activity.

In turn, the President of the IICS Program Council — Professor Renata Mieńkowska-Norkiene — pointed out she would like to note the problems resulting from the eventual budget veto in the context of such areas as education, the youth, and culture. She  also gave the example of the Erasmus program, as well as the creative sector, which has already suffered greatly in connection with the pandemic — and now could additionally lose out due to the fact it won’t receive any European funds within the multi-annual financial framework.

Dr. Jan Olbrycht, Member of the European Parliament, began his speech with the statement that the European Union is at a turning point for various reasons. He noted that such phenomena as the popularization of society, or growing populism, have been going on for a few years. The EU is also in a very difficult moment because of Brexit. If there isn’t an agreement by the end of the year the consequences for everyone will be very serious. The lack of economic solutions influences the job market. “Not only is one of the primary payers leaving, hence there will be less money, but one of the main representatives of the zone outside the Eurozone. This means that outside of the Eurozone a few states will remain, and they are economically weaker. The Eurozone will have about an 85% share of GDP, and in connection with this it is obvious that those states will decide," he said. If we want to preserve an EU with the same ambitions, more money should be found. Therefore, the following questions arise: what’s next with the EU? Are we increasing the contribution or decreasing our ambitions? “This discussion already started in 2018, and in 2020 came the problem of the pandemic, which turned everything upside down. The problem of ‘What is the EU supposed to be?’ didn’t disappear — another one came about. Where to get the funds to rescue the markets, the healthcare system, the labor market?” Olbrycht said.

A radical change of thought has followed. “We are trying to bring about a situation where the EU will take on huge debt in the financial markets, ipso facto this will be everyone’s debt and everyone will have to pay it back in a few years. Hence, we have a communitization of loans. In that case, where is the money to pay it back to be found? Contributions will need to be increased (unlikely), expenses cut (unlikely), or a third possibility — the creation of new own resources, or in other words the creation of a type of European taxes or other charges," the Member of Parliament explained.

The European Union is facing a challenge to prepare itself for a new situation. “If the EU will have its own resources, it will be stronger. If it will be stronger, not all countries will like that. In this regard, we have a 7-year budget and a Reconstruction Fund built based on credit which will enforce own resources, as well as the famed rule of law, which is the third aspect. Linking the rule of law is one of the elements of a different look for the EU that forces the introduction of its own resources. If someone vetoes the budget, they veto the entire idea of EU reform.”, Jan Olbrycht stated.

Returning to the issue of the division of EU funds, the presenter paid attention to the successful win of expanding funds for scientific research. “In the current situation, we can’t allow cuts in this field. Apart from studies on the vaccine, work is also being carried out on finding drugs for the coronavirus. The second matter we definitively spoke about was the issue of Erasmus - we doubled the amount of money from 2021-2027. The next matter is the increase of funds which make it directly to non-governmental organizations fighting for democracy and the rights of man — we tripled this amount to more than 5 billion euro.”, he said.

Dr. Jan Olbrycht remarked that if a blockage of the 7-year financial framework takes place, a provisional budget will enter into force, and this will mean an amount synonymous with 1/12 the 2020 budget. It will be intended only for programs that are continued and contracted — such as, for example, signed agreements on investments that must be paid, similar to subsidies for farmers. As an example, Poland is supposed to have 13 billion złoty to pay for investments from the political cohesion fund in 2021. The 1/12 system will make it so that our country gets 9 billion złoty because that system entails that one can’t pay in full, but only in part — explained Olbrycht.

Therefore, the question of what the EU is to be and how it’s supposed to function returns — is it supposed to be stronger or weaker? How is it supposed to react in the event of threats? According to the Member of the European Parliament, in the first months of the epidemiological threat, the European Union got lost. There was a moment in March where chaos reigned — some closed the borders, closed the economy, and blocked sales, others opened sales. In the end, it was realized that this was a dead-end, and a turn towards cooperation, solidarity, aid, common medical resources, and assistance at the borders must be done. The EU realized that there was no other way, that strong cooperation and solidarity relationships should be built, as threats can always appear. That’s why the current budgetary debate is a search for financial instruments of EU change. Someone who today is blocking and threatening a budget veto to use for their internal affairs is blocking the entire change process. It’s difficult to be surprised that dissatisfaction is huge. A veto at such a moment is a 3x veto.

Studies show that, in moments of crisis, Europeans count on the EU. The position of Poland and Hungary affects how the remaining countries perceive us. Professor Renata Mieńkowska-Norkiene noted that we’re beginning to see ourselves as freaks, a brake country, a those who are undermining the crisis recovery project. She also evoked the “Barometer” study, which indicates that Europeans collectively support the mechanism to link the payout of EU funds to the rule of law: “How did it so happen that Poles, who contribute to the opinion of ‘more EU in crisis situations’, at the same time support a veto?”, Professor Mieńkowska-Norkiene asked.

Jan Olbrycht, referring to the Professor’s statement, said that we must care about international integration. He recalled what led to Brexit. The then Prime Minister of Great Britain didn’t want to win the referendum, but only “confirm” and accordingly come to power. A several-year practice of manipulating public opinion and the universality of the lies in the public debate bore fruit. We are witnesses to the building of mistrust in the EU. In a few years, the findings could end up being shocking.

According to Professor Małgorzata Molędy-Zdziech, manipulation by fear is a very effective method. The need for security is one of the biggest needs in human life. The pandemic has shown this in the context of trust in the authorities and, likewise, in the need to receive the correct information. That’s why the reliable work of journalists is so important. “In Poland, civic media are being born. There is no other advice and action like a long march — a drop of water hollows out the stone. We must work on tools that make it easier to straighten out the types of lies that we are being inundated with today.”, she said.

Jan Olbrycht admitted that the European Union is carrying out weak political communication. The attempt at making European regulations for 27 states is backbreaking. Quite often, it ends in excessive bureaucracy. There is also the effort to construct a message and homogenous policy for the entire community, which nevertheless consists of diverse countries and, hence, of various societies. This is a difficult task. “No television station in our country conducts programs explaining what the Union is all about. The effect is pretty lamentable if — on one hand, we have poor communication, and — on the other — ruthless players who don’t know boundaries when it comes to whether they’re speaking the truth or not.”, the MEP finished.