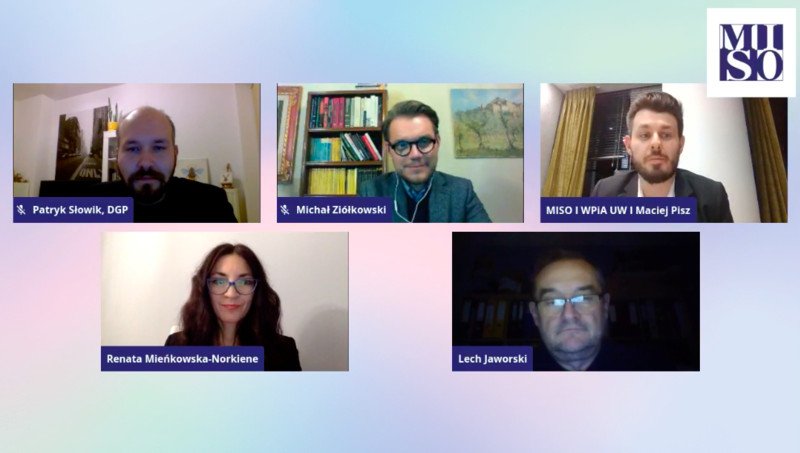 On December 3, 2020, a debate took place entitled “The Rule of Law - An Exclusively Polish Issue, or also a European One?”. The event was organized in an online format by the International Institute of Civil Society in cooperation with the Law and Administration Faculty of Warsaw University (a partner), as well as the magazine “Państwo i Prawo” (a media patron), and it constituted the second debate within the cyclical project “The Debate Club on State and Law”.

The debate took place with the participation of lawyers, political scientists and sociologists —  representatives of the world of science and media alike. Taking part in the meeting as presenters were: Professor Renata Mieńkowska-Norkiene (IICS), Professor Lech Jaworski (Law and Administration Faculty at Warsaw University), Editor Patryk Słowik (Dziennik Gazeta Prawa), as well as Dr. Michał Zółkowski (of the magazine “Państwo i Prawo”). The debate’s moderator was Dr. Maciej Pisz (Vice-president of IICS).

The debate was concentrated on presenting the issue of the rule of law itself from the perspective of a contemporary democratic legal state (and its practical meaning from Poland’s perspective, as well as the European Union’s), and on making an assessment of the expected political consequences to the Polish authorities based on questioning a mechanism linking the rule of law with the payment of EU funds in the 2021 to 2027 multi-year budget. Furthermore, the meeting’s organizers’ intention was to consider the meaning of the compliance mechanism (or its absence) on the everyday lives of every person and citizen, as well as to try to answer the question — which resulted from the title of the debate itself — of whether the rule of law is an exclusively Polish issue, or also a European Union one.

In the discussion’s introduction, Dr. Maciej Pisz turned attention to the fact that the reason for organizing a debate on the subject of the rule of law is both 1) the perceptible lack of a deeper, more meritorious debate on the issue and its meaning from the perspective of a contemporary democratic legal state (not only taking into account the interests of sovereign national states, but the common values lying at the substrate of European integration), as well as 2) the emerging, very significant discrepancies respecting the method of perceiving the issue of the rule of law and boiling down — on one hand — its recognition as a specific, systemic value universal for all democratic states and related with the certainty of the law, effective judicial control, the separation of powers or nondiscrimination and — on the other hand — to the recognition of the rule of law as an ideology or category subject to relativization and valuation (or even to a complete depreciation).

In the first part of the debate, the presenters discussed their perceptions of the issue of the rule of law. IICS’s Program Council President, Professor Renata Mieńkowska-Norkiene — who took the floor first — stated that the rule of law is a guarantee for the citizen that the authorities won’t be above the law and that there will not be double standards (separate standards for the authorities’ functioning and separate standards for citizens’ functioning). Moreover, she noted that “The rule of law guarantees us a sense that the authorities don’t have the possibility to avoid the consequences of their own actions, and that there is exactly the same accountability as citizens.”

She also reminded us that on September 30, 2020,  the EU published a report on the state of the rule of law in EU states (the first European Commission annual report on the situation of the rule of law in the whole European Union). In that report, the rule of law is understood in the context of the four following criteria: 1) a justice system, 2) the prevention of corruption, 3) the freedom and pluralism of the press, and 4) a mechanism for control and balance which relies on the influence citizens as to how the law is established. As the presenter remarked, the fulfillment of these criteria makes it so that citizens have the created conditions to function in a democratic country in which the rights of man apply, as well as one in which they can feel secure and have trust in the authorities. “However, while the situation in Poland looks as if there is law on paper, that law is not observed and the authorities abuse power.” - Professor Renata Mieńkowska-Norkiene said.

According to Professor Lech Jaworski of the Law and Administration Faculty at Warsaw University - who next took the floor in the discussion — in the Poland-EU conflict concerning the rule of law, the problem lies in the lack of a definition of the concept as it relates to the possibility of applying it to member states. As the presenter stated, “The lack of debate is the original sin for which we are suffering now. We are in the workout phase of a definition of the rule of law, and already have to decide on linking it to the payment of funds from the EU budget. Maybe that will lead to a subjectivization of the vision about which we’re speaking. A debate is lacking and should take place in a substantive atmosphere, not in an atmosphere of defending those or other views on the nature of political and moral beliefs.”

In Professor Lech Jaworski’s opinion the rule of law isn’t just the observation of constituted legal norms, but of those norms whose task is to guarantee citizens equal rights and the responsibility of the authorities to take action. “The functioning of EU countries is the functioning of certain organisms which have the right to autonomy and self-determination in specified spheres — in terms of the justice system, among others. Of course, that doesn’t mean complete freedom in regulation, as the norms of statutory law which define the framework of the rule of law must apply to certain universal principles that guarantee equality before the law and the responsibility of state authorities” - Professor Jaworski said.

Next from the group of presenters, Editor Patryk Słowik of Dziennik Gazeta Prawna agreed with Professor Lechem Jaworskim in terms of the difficulties of defining the rule of law. He assessed that the rule of law is one of the chief principles which were at the heart of the creation of the European community. Still, it is easier for us to intuitively define what the rule of law is not. “I’m wondering whether the rule of law is gradable? Is something lawful in full, slightly lawful, or completely unlawful? Is it binary? I have doubts here,” — he said.

In his statement, Editor Słowik cited an example of the situation which could put in doubt the legitimacy of examining cases in terms of compliance with the rule of law: “For me as a journalist, public authorities aren’t answering a [so posed] question (despite being required to do so). Therefore, how to understand that — whether it’s a violation of the rule of law, or whether there’s not enough to say that we’re an unruly country?” Additionally, in Editor Patryk Słowika’s opinion, over the past several years there wasn’t a determined reaction of EU decision makers relative to that which has been taking place in Poland. “My query is whether the rule of law has been preserved thus far, or has it never existed?” — he added.

According to Dr. Michał Ziółkowski of the magazine “Państwo i Prawo” — who took the floor as the last of the presenters — the statement that the rule of law is an undefined category is offensive. “Not only because it throws out many years of work of lawyers, philosophers, social psychologists, but also because it misleads citizens who are keenly interested in functioning in a state governed by the rule of law. We might as well say that constitutionalism and democracy, the common good or a common economy, are difficult to define. Demanding incessant definitions feels like defining madness. But if we’re already giving in to that, the rule of law could be perceived in a minimalistic way as an arbitrary proscription (and it is non-gradable, referring to Editor Słowik’s question)” — said the presenter.

Professor Lech Jaworski also referred to Editor Słowik’s statement. In Professor Jaworski’s opinion the authorities’ practice of not answering media questions is not in accordance with the law, but this does not translate to the rule of law and speaks to the authorities’ arrogance, which is of course unacceptable.

In the next part of the debate, the presenters discussed the effects of the adherence to the rule of law by the public authorities (or lack thereof) on the EU budget and on the everyday life of every person and citizen. Professor Renta Mieńkowska-Norkiene was the first to refer to this issue.

Per the presenter, in terms of the EU budget, the Polish authorities’ veto concerns — in principal — something completely different: the Polish government does not want to change the multi-year budget arrangements and the Reconstruction Fund. The presenter also observed that, in this context “The government’s point is not to act in the 'name of sovereignty,' but to put itself above the law. The effects are such that a distortion follows as to how Poland represents its own interests and how the remaining countries can perceive our country as a conversation partner. That could ruin our reputation.”

She also mentioned a public opinion poll entitled “Eurobarometer” (carried out by the European Parliament in October 2020). In Professor Mieńkowska-Norkiene’s opinion, the above poll shows that most Europeans want to link the rule of law with the payment of EU budget funds.

Dr. Ziółkowski agreed with Professor Mieńkowska-Norkiene’s opinion and added that every country counts on funds from a predetermined budget. “The Polish government took other countries hostage. In such a difficult situation a very radical instrument was used. Cooperation, negotiations and a shared search for a solution to the problem don’t involve this,” — he claimed.

Referring to the issue of eventual sanctions that could appear for violating the rule of law, Dr. Michał Ziółkowski drew additional attention to the fact that — in the current version of the regulation regarding the matter of linking the EU budget with the rule of law — the suspension of EU funds to a member state does not release that state from the responsibility of paying those funds to beneficiaries. “Citizens won’t be victims. The political authorities will be the victims, because they will have to deal with a problem which they themselves generated,” — he added.

Editor Patryk Słowik — referring to other presenters’ comments on the effects to the EU budget of the observance of the rule of law by public authorities (or lack thereof) — brought up the subject of politicians’ communications: “It’s worth it to consider whether politicians’ statements are for internal or external use. It is in the interests of everyone to get along. We know from experience that that which politicians say and that which they think are two different things. I don’t know whether that will happen now in December or at the beginning of the upcoming year, but I think that ultimately Prime Minister Morawiecki will be shaking hands with other EU politicians."

All of the presenters agreed on a response to the question put forward within the debate topic — the rule of law is not just a Polish issue, but also a European Union one.