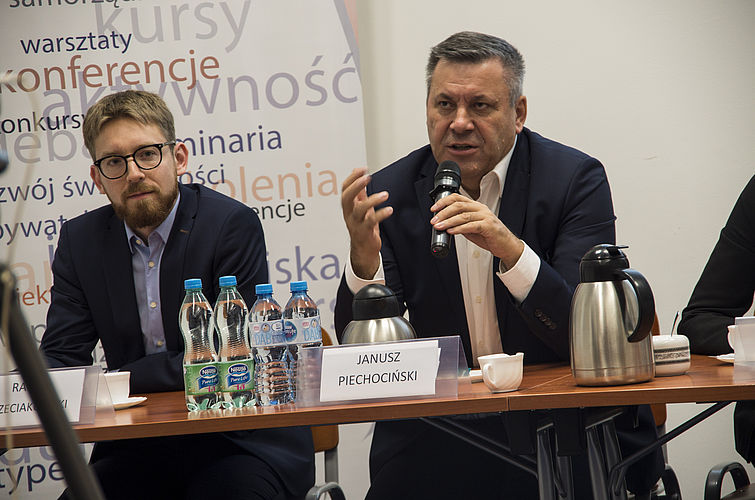 On 25 October 2018, the National Chamber of Commerce in Warsaw hosted the VI debate within the Debate Club on the Economy and Entrepreneurship titled “Immigrants – the only opportunity for the Polish economy?”

The meeting commenced with the remarks about the migration policy of the current Polish government. – The inflow of immigrants into our country needs to increase in order to maintain the economic growth – said Paweł Chorąży, the vice Minister for Investment and Development during one of the previous debates held by the Jagiellonian Club. He added that Poland should accept migrants, because thanks to them “the wellbeing of countries which achieved success” is preserved. These words cost him his position.

According to dr Marta Jaroszewicz from the Center for Eastern Studies, two scenarios regarding the migration future are possible – both the one where we open ourselves for migrants, and a different one according to which no migrants will be in Poland. The expert observed that the Western countries adopt different measures to cope with the demographic decline. As an example, Germany has been setting up schools in different parts of the world whose curriculum is closely tied with skills demanded by German enterprises. Thanks to this, a graduate of a given school becomes a duly qualified worker able to meet the demands of the German economy.

Dr Marta Jaroszewicz was of the opinion that the inflow of migrants from Ukraine was going to end within a 5-year perspective and that we should already start to consider what is going to happen next. Especially to consider if we are not about to lose a historic opportunity Poland is now facing, unfortunately as a result of the horror of a civil war to which our neighbors are subject. At the same time, it shall be noted that we are an uniformly ethnic country and the xenophobic and anti-immigration sentiments are on the rise. The question arises whether we are properly using the potential of the Ukrainian citizens coming to us.

Dr Nagmeldin Karamalla from the Southern Connect Foundation noted that we have been dealing with migration for millennia. Nowadays in Poland the reference to “the defense of Christianity” is made, but we shall remember that religion was brought to Poland precisely via migration. According to Dr Karamalla, the problem of Western countries is not the arrival of migrants, but the demographic decline  - both for the economy and the country at large. Lack of hands for work is worse than unemployment. It is easier to find a job place than to solve a complicated problem connected with the lack of employees on the market. The panelist convinced that migrants from Islamic countries, whom we fear so much, are - contrary to what one might expect - not that willing to come to Poland. When faced with a choice, it is evident that they will opt for richer countries where they can prosper and where the assimilation happens smoother. According to Dr Nagmeldin Karamalla migrations are an inseparable element of development – not only economic, but also cultural. He provided the example of Japan which up until recently had been closed to migrants, and now it regrets it, having to face a deep social crisis.

Dr Rafał Trzeciakowski from the Civil Development Forum noted that a decade ago 2 mln people left Poland, however a million of foreigners have recently come to Poland instead. This is an optimistic sign. The expert also observed that the current economic migrants are not typical migrants – they may work and live in Poland only for six months within a year. Normally, when the economic situation deteriorates and unemployment starts to rise, foreigners tend to leave Poland. It remains to be seen whether we will be able to keep them in our country. According to Dr Trzeciak -  it is highly likely that we will, as the difference in income between Poland and Ukraine is still two times larger than the respective income gap between Poland and Germany. What is also important are the migration networks. Ukrainians find it easier to settle in Poland than in Germany if they have here friends or relatives, or if they know what to expect thanks to experiences of people who already came to Poland. Also the linguistic familiarity significantly helps migrants to settle in in a new reality, and thus renders the costs of migration much lower.

Paweł Musiałek from the Jagiellonian Club did not agree with the statement that we are losing our opportunities connected with migration. He invoked the research done by OECD according to which Poland is the world leader in short-term migration. Nevertheless our priority shall be to cause the people who come to Poland within the circulatory migration to stay here permanently. At the same time establishing migration policy against the will of the society is likely to stoke anti-immigration sentiments and anti-establishment protests. Mr. Musiałek also pointed to one of the myths surrounding foreigners – according to him it cannot be said that they take our jobs; on the contrary, thanks to migrants the salaries rise, the economy grows, and thus the pensions are going to increase. Another fallacy is that migrants are employed in place of Polish employees because of cheaper work costs. The salary of a foreigner shall be increased by the fees of employment agencies, and often by accommodation and nutrition costs. In effect, the employment of a migrant is de facto more expensive than employment of a Pole. Enterprises decide to incur such additional costs because they have no other option – we need employees to meet contractual obligations.

Janusz Piechociński named examples of Western countries, and Poland, where enterprises dealing with fruit and vegetable harvesting had been shut due to lack of workforce. In addition, companies employing foreigners often forget to cater for their cultural needs, e.g. access to proper meals and cultural products. The former Minister of Economy provided an anecdote about governmental negotiations with Uzbekistan, under which Polish enterprises were to employ 500 qualified welders and procure international contracts. One internet entry of a Polish MEP who opposed the deal was enough to cause the government to leave the negotiating table. A similar thing happened with the highly qualified workers from the Philippines who now tend to leave Poland. The panelist added that also big countries, such as China, face shortages of workers, mainly in industry.

The final observations were made by dr Marta Jaroszewicz, who stressed that migrants shall not be treated merely in economic terms. What is equally important is the social context. Research about Ukrainian citizens staying in Poland clearly shows that they focus not so much on economic aspects, but on social ones instead, including a friendly approach of the communities, the quality of educational facilities, the public communication and the cultural closeness.

The debate was organized by the International Institute of Civil Society, the Social Dialogue Committee of the National Chamber of Commerce (organizers) and Orange Polska (partner). 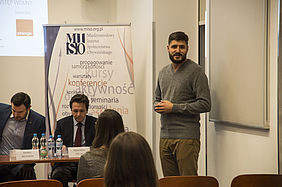 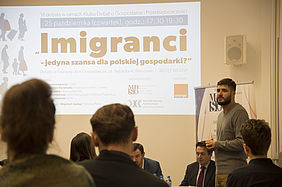 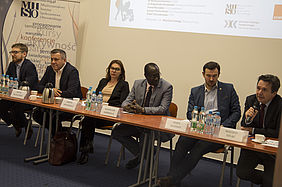 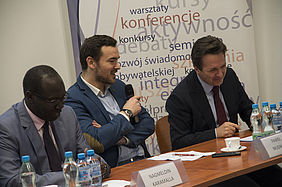 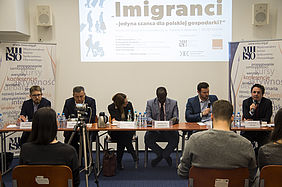 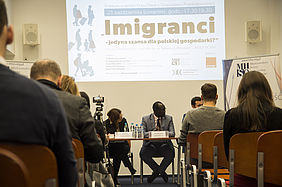 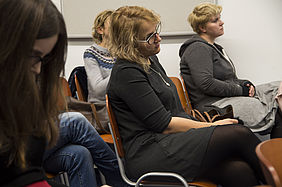 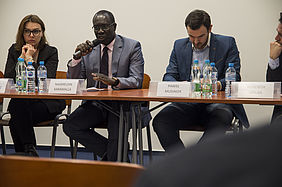 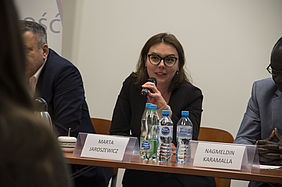 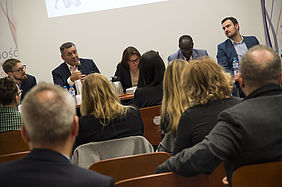 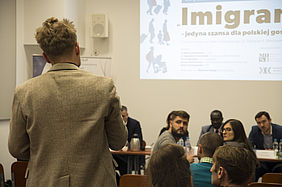 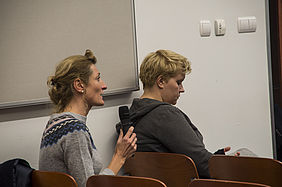 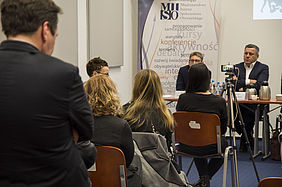